When thinking about new innovations in cosmetic surgery, it is helpful to look back at the history of where things have been, so we can better predict where new breakthroughs may happen in the future.

Here is an interesting article on the history of breast augmentaiton and breast enlargement from the BBC.

A brief history of breast enlargements 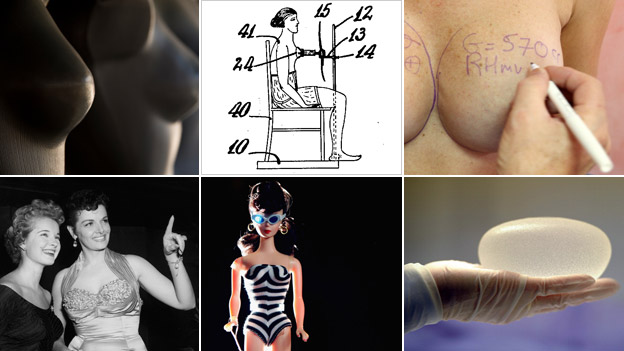 It is 50 years since the first breast enlargement using silicone implants. Today it rates as the second-most popular form of cosmetic surgery worldwide, undergone by 1.5 million women in 2010.

It was spring 1962 when Timmie Jean Lindsey, a mother-of-six lay down on the operating table at Jefferson Davis hospital in Houston, Texas.

Over the next two hours, she went from a B to a C cup, in an operation that made history.

“I thought they came out just perfect… They felt soft and just like real breasts,” says Lindsey now aged 80.

“I don’t think I got the full results of them until I went out in public and men on the street would whistle at me.”

Though the operation boosted her self-confidence – and she enjoyed the extra attention – she had never planned to have a breast augmentation.

Timmie Jean before and just after her op, and today

Lindsey had been to hospital to get a tattoo removed from her breasts, and it was then that doctors asked if she would consider volunteering for this first-of-its-kind operation.

“I was more concerned about getting my ears pinned back… My ears stood out like Dumbo! And they said ‘Oh we’ll do that too.'” So a deal was struck.

It was Gerow who had first come up with the plan for a new kind of breast implant.

“Frank Gerow squeezed a plastic blood bag and remarked how much it felt like a woman’s breast,” says Teresa Riordan, author of Inventing Beauty: A History of the Innovations that have Made Us Beautiful.

In search of a bigger bust 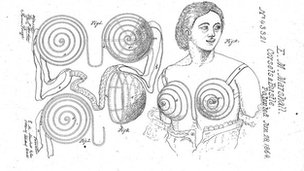 Injected: Paraffin was tried in the 1890s, but quickly dropped because it leaked to other parts of the body

Transplanted: In the 1920s and 1930s doctors tried moving fat from other parts of the body to the breast

Inserted: Polyurethane, cartilage, sponges, wood and even glass balls, were all tried in the 1950s

“And he had this ‘Aha!’ moment, where he first conceived of the silicone breast implant.”

The first guinea pig for the silicone implant was a dog named Esmeralda. The basic principle behind the prototype was simple.

“A rocket achieves lift off with lift and thrust – same thing in breast augmentation,” says Thomas Biggs, who was working with Gerow and Cronin in 1962 as a junior resident in plastic surgery.

“I was in charge of the dog. The implant was inserted under the skin and left for a couple of weeks, until she chewed at her stitches and it had to be removed.”

The operation was deemed a success and Gerow declared that the implants were “as harmless as water”. Soon after, the medical team began looking for women to try out the implants.

Timmie Jean Lindsey has only a hazy recollection of her operation day.

“As I came back from surgery there was just a lot of weight on my chest – like something heavy had been sitting there.”

“That was about it – after maybe three or four days the pain part of it had let up.”

The doctors were pleased with their work. But, at the time, Biggs had no idea quite what they had on their hands.

“Sure it was a little bit exciting, but if I’d had a mirror to the future I’d have been dumbstruck,” he says.

“I was not wise enough to realise the magnitude of it.”

The significance began to hit home when Cronin presented the work at the International Society of Plastic Surgeons in Washington DC in 1963. “The plastic surgery world was absolutely set on fire with enthusiasm,” says Biggs.

The time seemed right. 1950s America had seen a whole swathe of cultural influences come together around the ideal of a larger breast.

It was the decade in which Playboy magazine and Barbie launched, and film stars played a big role too.

Where are breast implants most popular?

“The busty look of Marilyn Monroe and Jane Russell and also Dior’s New Look of 1957, really emphasised this curvy silhouette, and got women thinking about augmenting their breasts,” says Teresa Riordan.

Marilyn: Did she or didn’t she?

I found no evidence whatsoever that Marilyn Monroe ever had any surgery to her breasts.

Thomas Noguchi, who performed the autopsy on Monroe, noted scars on her body – from operations on her gallbladder and appendix – but made no mention of incision marks under the breasts.

I did hear that on occasion that, to make the treasure that the actress carried naturally appear even more bountiful, she occasionally enhanced it a little by putting additional padding into her bra.

A mortician was quoted in a documentary – ghoulish man – as saying that he fished some “falsies” belonging to Monroe out of the morgue and still had them in his possession.

A falsie refers to a bra cup that has been enhanced with spongy material to make a bosom appear larger than it naturally is. But not one of the some 600 people interviewed for my book – dressmakers, lovers and friends – suggested she used any such thing.

Rumours always proliferate about someone as celebrated as Monroe, especially after they are dead and cannot respond.

Anthony Summers, author of the biography Goddess: The Secret Lives of Marilyn Monroe

Through the years, all manner of approaches had been tried to increase breast size. In the 1950s, doctors started inserting sponge implants into women’s breasts. Some allege that Marilyn Monroe had this operation, though this is hotly contested.

Monroe biographer Anthony Summers says people he interviewed for his book, who knew her well – including Billy Travilla, who was both her dressmaker and one of her lovers – said she had no reason at all to have any breast enhancement.

“The filmmaker Billy Wilder described Monroe’s bosom as, ‘a miracle of shape, density and an apparent lack of gravity,'” he says.

The sponge technique worked well at first, but did not last – the sponges soon shrank, and became “hard as baseballs” says Biggs.

Silicone was also a material of the moment. “There was a post-war American fascination with all things plastic and artificial,” says Riordan.

It is not in the US, though, that the silicone was first used for breast enlargement, but in Japan, where it was tried out by prostitutes.

Eager to do better trade with the occupying US forces, who they presumed preferred a larger chest, they experimented by injecting silicone – stolen from the docks of Yokohama – direct into the breast.

These injections turned out to have a nasty side-effect known as “silicone rot”, in which gangrene set in around the injection site.

The early silicone breast implants pioneered in the US fortunately avoided this hitch, but were not entirely problem-free.

Hematoma, where blood collects in a swelling, was one early difficulty. There were cases of infections too, and also “fibrous capsular contractions” where a scar would form, making the implant hard.

“We are not worshipping what we had 50 years ago, because that’s history,” says Biggs.

In the 1990s, the US Federal Drug Administration (FDA) banned silicone implants as it investigated possible links to an immune response disease. Saline implants -saline solution inside a silicon shell – continued to be used.

The industry made big payouts, but studies found no basis for the fears, and silicone implants returned.

In 2010, implants made by French company PIP out of silicone intended for use in mattresses, were banned in some countries. French authorities say they have a higher than usual rupture rate.

The scandal peaked in December, when France recommended routine removal of all PIP implants. Breast enlargement figures for 2011 are expected to show a fall, when released later this year.

There have been many advances over the decades, like 3D-imaging, and implants that are increasingly rupture-proof – and the range has widened.

“In the early days, we only had four choices or sizes – large, medium, small and petite. Now we have over 450 choices,” says Biggs.

Around the world, breast enlargement is now the second-most popular cosmetic surgery operation, after liposuction (the removal of fat). In many countries – including the UK – it is the most popular operation.

It’s not only used by women who want to perfect their body shape but also by patients who have undergone mastectomy as a result of breast cancer. This was something Gerow and Cronin envisaged from the start, and one of their motives for developing the operation.

For many years, Timmie Jean Lindsey kept fairly quiet about her breast enlargement – one boyfriend never knew for example, and it was only decades later that she told many of her friends and family about it.

Fifty years on she remains delighted with the results, though there is no stopping the passing of time, she says.

“You would think they would stay real perky, but no – they are just like a regular breasts, they begin to sag over the years. That surprised me. I figured they’d just stay where they were.”

But she still very happy with the little piece of history she carries inside her body.

“It’s kind of awesome to know that I was first,” she says.

**************
Breast augmentation will most likely never be replaced by a non-invasive procedure, so innovations to incisions and implants themselves will be the norm. There are many different options for breast augmentations and cosmetic surgeons, make sure you do your research on your doctor before deciding, or contact us for our plastic surgery guide.